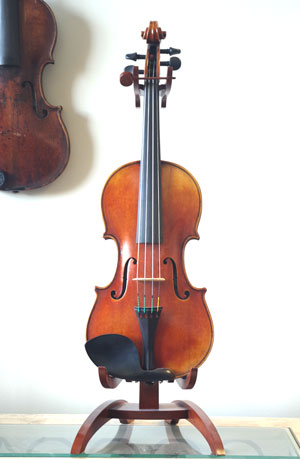 The phone was ringing. If it had rung a minute earlier I would have let the answering machine pick it up like the last call... I'd been making sure the crack in the cello top lined up right from end to end before the glue set. But having adjusted the clamps and rechecked the alignment, I was wiping glue when it rang. So I answered as I cleaned up. The voice on the other end was assertive and abrupt... almost rude. Since my state of mind was still locked in a hard focus I hardly noticed.

"I have a problem no one can fix. I don't think you can either."

"My violin doesn't sound like it used to. I've been to lots of shops and had lots of things done to it. No one can fix it. But I want you to take a look anyway."

When she showed up for her appointment and started playing, the instrument didn't sound bad. Sometimes with a great sounding instrument it's like that. What would normally be a very good sound isn't anywhere near it's maximum potential. So I looked at her violin and saw the alignment of her soundpost and bridge was a bit askew. With a little adjustment I realized this wasn't one of those instruments and told her she needed to work around its problems.

"But it used to be so much easier to play! Isn't there anything you can do?!"

Finally we decided to cut a new soundpost and bridge. When she picked it up a few days later, she seemed to like it and went home happy. It didn't last a week before she was back for another adjustment.

In the course of our sound manipulations she asserted that as the concert mistress of a good community orchestra, and someone who had been practicing for the last 50 years, she shouldn't have to practice anymore. Having paid her dues as it were. She had stopped practicing some 2 years earlier and the sound problem mysteriously appeared shortly after.

Well. I got very specific with my questions.

It turned out that no matter how low the strings were, she couldn't press down hard enough to get good contact with her fingerboard, causing an unfocused sound.

Figuring she had come to me with a problem to solve I gladly complied. If only I'd realized I needed more tact. But that's another story. I told her there was no charge for the adjustment and that the muscles in her hands were getting weak from lack of use. I told her to go home and practice.

She huffed out and I haven't seen her since.

But she did have a valid point. She was searching for the setup and maintenance that would have her instrument playing in peak performance. She had just forgotten, it takes 2 to tango (pardon the cliché). Since I know you practice 4 hours a day I should probably play it safe and stay on my side of the tango. More specifically, discuss things you can do to help maintain your instruments and bows.

For starters, and forgive me if I'm telling you something you already know, when you pick up and hold an instrument, do it by the neck. That's its handle. You avoid putting fingerprints all over the varnish for the rosin to settle in and create an eventual "crust". A crust that will cost you a minimum of $85 to get it cleaned off and repolished. Another plus to handling an instrument correctly is you'll gain a certain level of trust, as people who handle instruments on a serious level perceive your competence.

One more thing you can do to avoid that $85 cleaning is to wipe the perspiration and rosin off your instrument, strings and bow each time after playing. Use a soft, non-abrasive cloth.

If you decide to use a commercial polish, use it sparingly to avoid a wax build up. Also avoid using it around unsealed cracks, even if they're glued.

Below is a short list of things you can do. As I remember more I'll start corralling them into a section of "Maintenance Tips." But for now:

All the components making up the sides. The interior of the rib structure has 6 blocks to which the ribs are glued. 1 in each of the 4 corners and 1 in each end. The neck is fit into the upper block and the end button is fit into the lower block.

The other interior components of a rib structure are the linings. They are small, thin pieces of wood (usually spruce or black willow) bent to the curves of the ribs and glued between each block on the upper and lower edges of each rib. They add structural support and more surface area for the top and back to be glued to.

If you have any questions about any of these points I hope you'll give me a call so I can be a little more help. And hopefully between both our efforts, the music world will be a better place.